Harvestfest will host live music at Harvey Park and on T-Wharf throughout the day of the festival. Check out the bios and music of this year’s featured musicians and make plans to join us in enjoying live music while enjoying the best of local food!

Cold Chocolate is a Boston-based band that is creating an exciting and unique new sound in the world of Americana: fusing bluegrass and roots with a dash of funk. With original tunes and technical prowess, this four-piece ensemble is rocking audiences with guitar, banjo, upright bass, drums, and four-part harmony. Guitarist/songwriter Ethan Robbins and bassist Kirsten Lamb met at Oberlin College. Banjoist BB Bowness hails from Koitiata, New Zealand. Drummer Ariel Bernstein brings a light and tasteful groove to Cold Chocolate’s tunes.

Harvestfest is fortunate to have standout local musicians Joe WIlkins and Ryan Goodhue performing together as Nufolk Duo. Joe is a multi-instrumentalist, songwriter and producer who writes, records and performs continuously in the Greater Boston area and beyond. His musical interests are astonishingly broad, ranging from Afrobeat to Zydeco. You may find Joe covering the Grateful Dead with the band Live Dead or performing Afrofunk with the 10-piece Poppa Cigar. Ryan Goodhue is equally flexible. He plays piano, keyboards, and accordion. He is a powerhouse musician, classically trained, but also having studied jazz performance at Northeastern University. He is the house pianist at the First Parish Church of Newbury.

“Above Water” is an American rock/pop trio made up of James Vassallo (vocals and guitar), Jake Stavros (guitar) and Dan Gantt (drums). They were discovered and developed in early 2013 under the watchful eye of skilled indie award- winning songwriter/producer Brad Byrd. These talented young artists have played at many venues across the north shore, including Guisseppe’s Ristorante and The Dog Bar (Gloucester, MA), The Lions Club (Peaks Island, ME), Rockport New Years Eve and Motif #1 Day (Rockport, MA), and a TV performance and interview on the Local Music Seen with Allen Estes.

Quantin Callewaert is a guitar prodigy from Byfleid. At the age of 14, he already has performances at such venues as New Moon Coffeehouse, Amazing Things Arts Center, Firehouse Center for the Arts, and Chianti Jazz Lounge under his belt. His began playing classical guitar, but he has broadened his interests to include steel-string guitar, and he is now writing songs and singing, too. Quentin has the early slot at Harvestfest so he can get home in time to represent Triton Regional High School playing clarinet in a marching band competition.

Gloucester’s 3rian King is a singer-songwriter like no other. He leads the popular band What Time Is It, Mr. Fox? with his gender-defying voice. His songs are poetic, inventive, and emotionally naked, and his song “Cold Rain” was recorded by New Orleans soul queen Irma Thomas on her Grammy-nominated CD “Simply Grand”.

Gloucester’s Charlee Bianchini is driven by three things: travel, writing, and music. She travels with purpose, witnessing the endless ways that people live their lives and seeking to be a better citizen in a world that is fast growing smaller. She writes with wonder, trying to process all of the information acquired in her journeys. Her music is the voice of joy, concern, and empathy with which she is left. Charlee sings a growing body of original songs, accompanying herself on the guitar. Jack Tomaiolo has performed on stages around the world, and will accompany Charlee on lead guitar.

Sasquatch (Paul Cohan) is best known to Rockport Farmer’s Market aficionados as the force behind Sasquatch Smokehouse, purveyor of fine smoked fish. But Sasquatch will reveal his musician persona at Harvestfest, performing his original music and select covers with the inimitable John Hicks.

Check out the Schedule of Events* online or download a PDF of the day’s activities! 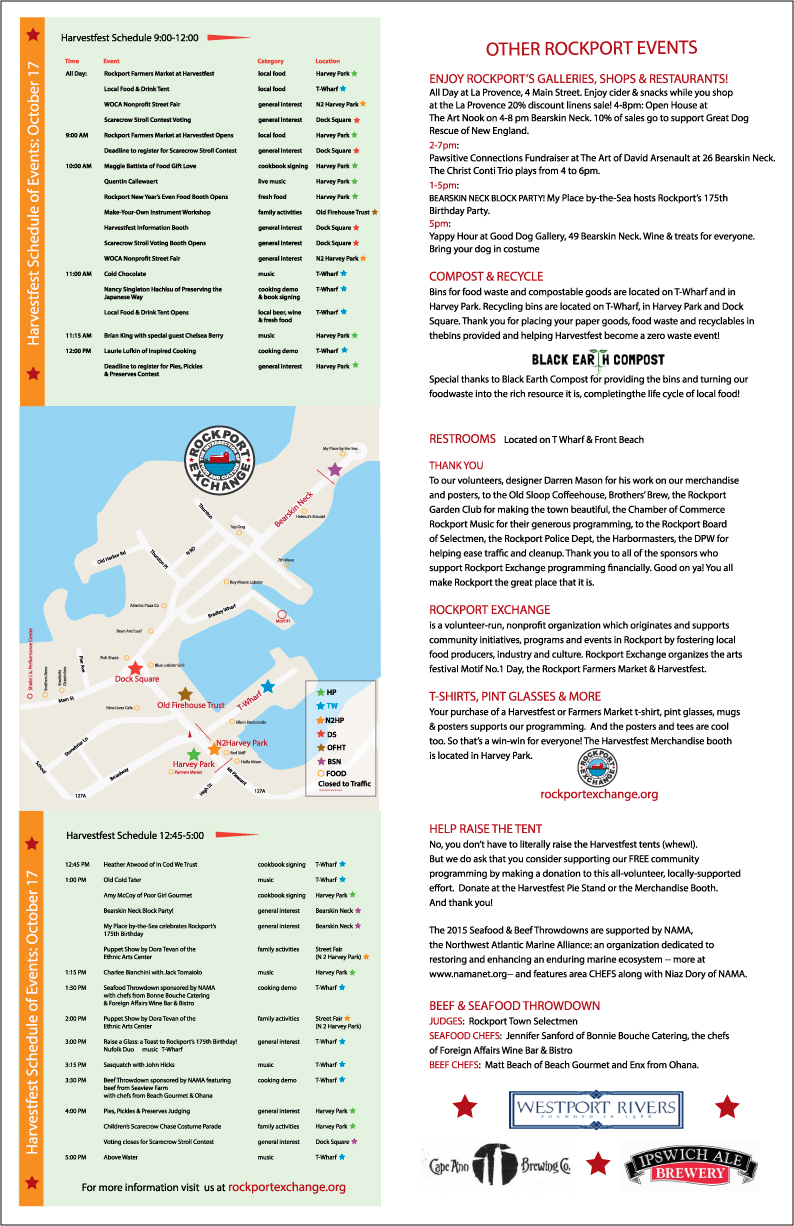 *Subject to change. Look for additional events the day of the festival.

This error message is only visible to WordPress admins

Please go to the Instagram Feed settings page to create a feed.